A few weeks ago I watched this video clip. It covers the topic of ethical farming practices and how we all have embraced cruelty to animals.

Because we don't care how our food (and in particular, our meat) is raised.

It is a clip about how food is marketed. It talks packaging and verbiage. It talks about how consumers are the guaranteed factor of marketing. We choose to buy and thus to ignore.

As you watch the reactions of the people in the audience on the clip, you see expressions of horror and disgust. The scene ends with the presenter walking off the stage. To silence. Not applause.

Everyone feels horrified and guilt stricken. 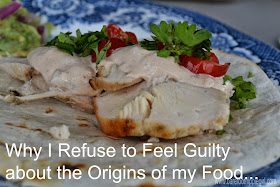 Yes. I agree that I am part of the problem. If I (and a bunch of others like me) refused to buy meat raised on these farms, the farmers would eventually have to sit up and take notice.

I don't embrace cruelty to animals. Cruelty to anything defenseless is despicable. And I am not particularly thrilled with the amounts of hormones in my food.

But I refuse to pay exorbitant prices for food because it is raised free-range or hormone free. And thus I continue to be part of the cruelty problem.

But, even more than refusing to pay exorbitant prices, I refuse to feel guilty about these animals.

I've got much bigger fish to fry.

When abortion is no longer legal or practiced, then I will feel guilty about where I get my meat.

When human trafficking is eradicated, then I will feel guilty about thousands of chickens stacked on top of each other.

When children are seen as a blessing and not an inconvenience, then I will worry about pigs and cows.

When children are not put into a category of something we can or can't afford, then I will consider paying more for certain ethically raised food.

When our society places as much value on our most valuable commodity as Jesus Christ did (the commodity being humans, and the value being His life and death), then I will focus more energy on the treatment of animals.

It's all a matter of perspective. And priority. 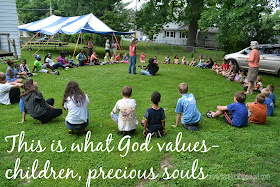 In the book of Amos, God delivers a scathing denouncement on Israel and Judah and the nations around them. He doesn't bother with topics of animal cruelty-though it happened even back then. God judged these nations because of their excessive cruelty to other human beings.
That's a sobering thought.

I'd say we have a whole lot more to answer for than some chickens and cows.

(More food for thought...it isn't that God doesn't value animals either. There is the verse about how God knows each sparrow that falls. But the the thought emphasized after that is how much more, speaking about human life.)

Do I emphasize what God emphasizes? How do my priorities line up with His?